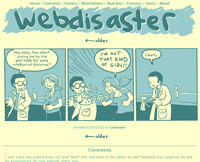 Version 6
(9/21/09 – 8/10/12)
As version 5 of Webdisaster gained popularity, Powers decided to fix some of the limitations of the custom code by switching to WordPress. He made his own custom theme and kept the same basic format as before, but added index pages, improved navigation, categories, and most importantly, updated content. Versions 5 and 6 of Webdisaster represent a golden age of sorts, where new drawings were far more regular than ever before. Powers made a concerted effort to keep drawing frequently and developed a larger fan base, perhaps twenty or more people! And just as suddenly as it started, in January of 2011 it stopped again, leaving new fans frustrated and completely in the dark for over a year and a half. 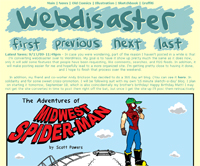 Version 5
(5/4/08 – 9/21/09)
The first version of the modern age of Webdisaster. In May of 2008 Scott and Kim changed the course of their lives forever by deciding to become parents. When he learned Kim was pregnant Scott started drawing again, knowing full well that the impending infant would require a lot of time. If he didn’t make art a priority before the child came, there would be little hope of building up momentum after. Powers hit something of a stride in this era, drawing not frequently, but a lot more frequently than he had since high school. More and more people noticed as well, which further encouraged him to continue. This version of the site is hand-coded php and mySQL, so the functionality is somewhat limited.

Version 4
(4/6/06 – ?)
This is where Webdisaster attempted suicide. It’s not entirely clear why Powers decided to alienate his entire audience by removing all of the user-submitted content, converting to Joomla, not providing any new real content of any kind, and the not updating for years after doing so. Sources say Powers was kind of down at this point about not drawing in a long time and was making an attempt to remove the ‘blog’ element in favor of a more design-centric theme, but after this redesign and the negative backlash that followed, Powers gave up on the site. After the change on 4/6/6, Webdisaster entered a long period of stagnancy and was essentially a waste of a hosting package. As with version 2, the images weren’t saved before the server was wiped, so most of the ‘design’ aspect is completely lost now. 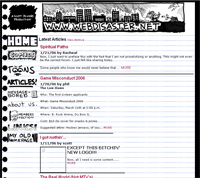 Version 3
(7/17/04 – 4/6/06)
The second iteration of Webdisaster, which was basically just a new theme and a redesigned php backend that solved some issues Scott was dealing with at the time. This saved version is fully functional and contains most of the content from version 2 below, minus the rotating slogan, withdrawal index, and health index. There are some real gems in here if you take your time and dig through the articles. 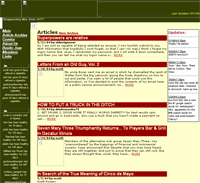 Version 2
(12/7/03 – 7/17/04)
The original Webdisaster design. In 2003 Scott and Kim moved to beautiful Decatur Illinois, also known as the City of Dreams. Scott started doing some web design in a professional context for the Decatur Herald & Review, so he bought his own domain name and hosting plan in an effort to build a site from scratch and learn php and mySQL. The original webdisaster was set up as sort of a multi-author blog with a few little added twists like a user-submitted  ‘slogan’ under the header that changed every time the page was loaded, a ‘withdrawal index’ where users could track how long their non-smoking streak was in an effort to quit, and a similar ‘health index’. Unfortunately, Scott changed the entire design of the site on 7/17/04 and didn’t save the original source files. The only copy that exists is a cached version on the Wayback Machine, which is copied and presented here. Unfortunately, the images, links, and database have not been preserved so most of the functions do not work. Mr. Powers may come back and re-create this seminal piece of web history, but don’t bet on it.

Version 1
(The Benito Jose Experience, hosted on Geocities from ~1996-2003?)
Before Webdisaster, there was The Benito Jose Experience. Back around 1996 when Scott was first discovering the internet at Kaskaskia college in Centralia IL, he signed up for a Geocities homepage. Mostly it was something to switch the screen to in the computer lab during the day when wandering staff eyes made playing Nethack and downloading hentai cartoons difficult, but it also became a place for young Powers to develop his online identity and learn HTML. For those that don’t know, the Joses are Scott’s closest friends. They’ve all known each other since high school or thereabouts and still have regular although now too-infrequent gatherings including Game Misconduct, their annual video game hockey tournament. Why they called themselves Joses and why Scott chose to represent them with Samurai Shodown characters is a mystery, but perhaps the dedicated historian can finally solve the puzzle now that the original site once again sees the light of day.